Can we really afford to keep producing food the way we do today, and still provide for generations to come?

Both human and animal food production as it currently stands is a very wasteful process. And when you take into account that:

by 2050, food production is projected to increase by about 70 percent globally and nearly 100 percent in developing countries

We need to start changing the way we approach food production, before the problems become too big to handle.

It’s starting to become a question of global food security!

But what are some of the issues that causing so many problems right now?

Our Food Waste is Excessive

Although this is not something that is on everyone’s radar, we actually waste an awful lot of food each year.

If you take the time to have a look at what is thrown out at your local bakers each day, or investigate how much of our fruit and vegetable production is considered to be “unfit” for consumption (often due to size, shape or blemishes) it is actually quite astounding.

Some motived people, such as Jeremy Seifert  live off of this “waste” because it is in fact not really inedible.  Such a stance on food waste clearly demonstrates how much we are needlessly throwing away each day.

Another person to watch in this space is Tristen Stuart who is helping raise awareness of food waste with such amazing events as Feed the 5000:

What is also motivating to see, is that this issue is starting to become mainstream with the release on April 22nd of Just Eat It: A Food Waste Movie:

And if you want to talk statistics, which are obviously hard to  measure accurately, one estimate from this article in the Guardian states that:

As much as 50% of all food produced in the world ends up as waste every year according to figures from the Institution of Mechanical Engineers.

Now that is an incredible amount of waste, especially in a time where water shortages are causing us no end of problems.

[Tweet “We throw away an estimate 50% of the food we produce, isn’t that an insane amount of #foodwaste ?”]

Is Water Shortage And Drought Really An Issue?

One of the greatest issues we face as food production grows to meet the world’s expanding population is one of water availability.

The developing world has faced this problem before, but in Western countries we often consider ourselves immune from such issues. However,  recently some very developed areas of the world have suffered, or are suffering, from severe water shortages.

The Australian Millenium Drought is considered to be the worst drought to have hit Australia since it was settled in 1788. And Australia is no stranger to drought, being an inherently quite dry continent.

The drought officially ran from 1995 until 2009, and had quite an impact on a country that relies heavily on water for it’s own food production and exports.

Responses to this long standing drought brought some interesting solutions to light such as:

Although these solutions helped to address the problem, many of the hard questions on how we use our water to produce our crops were largely left untouched.

Another interesting case is California, as they are currently suffering under drought conditions, which according to the National Geographic:

has depleted snowpacks, rivers, and lakes, and groundwater use has soared to make up the shortfall

So this means California is using unsustainable groundwater aquifers to make up their current shortfall, but in the long term there are bigger issues at stake.

The agriculture industry has not surprisingly become a target during this crisis which:

could mean cutting production of water-intensive crops, such as almonds and other tree nuts.

Obviously, these are the easy wins, but we seriously need to look at how our water is used to get food to our table, not just which crop is the most water hungry from the outset.

Why Insects Are A Great Alternative

One of the greatest benefits of introducing insects into our diets is the amount of resources we can save.

When you compare insects with one of our favorite protein sources, beef, the statistics are quite mind-blowing. 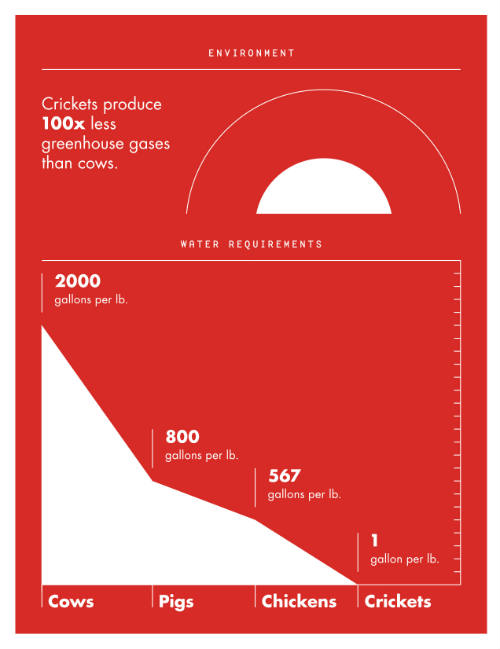 Either way, crickets clearly come out  on top.

As you can also see, the emissions from crickets are also 100 times less than cows, which is a bonus we also cannot afford to ignore, especially given the current greenhouse gas problems that we face. Global warming anyone?

It all gets a little bit more real when you consider that:

More than two-thirds of our agricultural land is devoted to growing feed for livestock, while only 8 percent is used to grow food for direct human consumption

What this actually means is that a lot of our food production capacity, water and other resources are wasted to inefficiently produce meat. Because we do not grow meat directly, but instead grow the crops, to feed the animals, to get the meat. The process is inherently wasteful. Insect production on the other hand, is actually very efficient.

Take crickets for example (again to keep the comparison clear), they:

take six times less feed than cattle, four times less than sheep, and half as much as pigs.

So again, the feed savings are huge. As are the land savings, which is another issue altogether.

More facts: read more interesting insect vs meat facts here and a fun video on the topic below.

[Tweet “Imagine how much water we could save if we ate more insects and less beef! #entomophagy #edibleinsects”]

We have mostly been talking about meat production and it’s associated resource waste, but what about the other end of the spectrum. Food waste itself.

As I mentioned earlier, an estimated 50% of food is wasted each year. This is where insect-based protein production, predominantly for animal feed, is coming into it’s own.

There are already a huge range of companies playing in this field of food waste to insect protein and fat production, to help supply feed for the fish, poultry, cattle and even pet industries.

The idea is simple:

It’s an innovative idea that is gaining traction and solving two big problems at the same time:

And if you want to get in on this trend yourself, you can buy kits to process your own food waste and turn it into feed for your own farm animals.

What Can We Learn From All This

As humans we often wait until things are almost too late to act and solve the problems that we face.

In this case it is our planet and it’s inhabitants (us!) that are suffering as a result of our bad habits and inefficient food production practices.

It is time to make a change, and insects are one of the clear ways out of this mess!