In this post I am going to show you some of the top companies that are producing insect feed for mono-gastric farmed animals and some other interesting purposes.

The road to insect based products are being paved by some very creative and innovative companies. Many of which are already selling products that are available to both consumers and industrial customers right now.

A few weeks ago we covered some of the insect food products you can buy at supermarkets or online right now. However this time I wanted to take a look at the other side of the coin –  feed companies using insects.

There are so many out there popping up all the time, so this list is not intended to be comprehensive. Let us know if there are companies you think should be on this list.

These are instead the companies that have popped up on my radar over the last year or so. Companies that are mostly using similar broad technologies and techniques to create industrial scale insect based feed and other products.

What Insects Are They Using, and Why?

Unlike the large range of insects that we see being used in consumer food products, feed companies are mainly using the larvae of the Black Solider Fly.

Why is the black soldier fly so popular, you might ask?

It seems that the black soldier fly is a very good option when it comes to industrial scale production of feed. In fact, the feedipedia states a whole range of benefits which perhaps explain why it is used so much:

So these very useful insects can produce masses of handy proteins and fats that can be repurposed by feed companies. And the side effects of the flies are minimal to none. On top of this, they are great at processing wastes (like foods) that we otherwise have to place somewhere to simply rot.

Other Flies Being Used

Agriprotein in particular is also using a couple of other flies to process various kinds of waste.

I will not go into specifics in this post but there are other insects that could be used to produce feed and the FAO has some further information on this if you are interested (see section 7.3).

Bio-waste processing is a fantastic alternative for producing animal and fish feed. Normally such processes are resource intensive and and wasteful too. So the insect alternatives are something that is fast opening people’s eyes.

And with the increasing demand for products like fish, this issue is becoming more important. Especially as the oceans are already becoming overfished.

A World Bank report stated that by 2030 two thirds of the world’s seafood will instead be farm-raised. The question then is: where will all of the fish food come from? Currently millions of tons of wild fish (anchovies, sardines etc) are being used to raise farmed fish like salmon. However, such feed options are just not sustainable. It can take up to:

So instead of wasting our precious wild fish resources to make protein for farmed fish, it makes a lot more sense to use less resource intensive products like those from insect larvae, right?

[Tweet “Why not use insects to make fishmeal, instead of using our precious wild fish #feed”]

The other option has always been soy-based proteins, which consume 95% of the soy production right now. And although this is somewhat better than using fish to feed fish, it is still quite resource intensive. Especially when you compare it to insect larvae products which actually consume waste products instead of valuable farming resources.

Now you know what these companies are doing, and how they are doing it (more or less, I will let them explain the details of their own processes), let’s take a look at some of the most outstanding ones around.

The Enviroflight team are using the Black Soldier Fly larvae to process waste products (food, brewery waste etc) and turn them into useful food and plant nutrients. They are working on insect meal animal feed as well as plant fertilizers all as products of their Black Soldier Fly based systems.

Agri Protein produces two products (a natural protein meal and oil) which can be used as a growth facilitator in agricultural feed preparations.  Some of the by product of their larvae can also be used and sold as a soil. And they also sell the dried larvae directly as by the pet food industry.

Ynsect are still in the development phase, but they are working with both flies and beetles using similar bio waste processing techniques to most of the companies on this page. They will then use the by-products of this process to develop a variety of products including animal and pet feed, plant nutrition and more.

What Do They Do?

Protix have developed a broad range of insect derived products ranging from:

They also provide some of their knowledge and insect raising technology if you are interested in getting started yourself. You can find more details here.

What Do They Do?

What does that actually mean? Well, they source waste foods from grocery stores and food suppliers, such as

This waste food is then fed to insect larvae (from the black solider fly) that consume this material. The mature insects are then harvested and turned into nutritious protein and oils that can be used as a replacement for wild fish and soy alternatives, that are far more costly and resource intensive.

They sell a range of products from animal food to oils for animal foods (that replace the standard omega oil sources).

Another bonus of their harvesting process is a fertilizer that is nutritional rich and a great alternative to the standard chemicals that are used.

BioFlyTech are a spin off of the University of Alicante in Spain. They have four separate divisions, focused on the use of flies (various species of dipterans) as alternatives to current feed, pollination and other technologies.

Their feed division uses the flies as raw material for animal feed. The insects are processed to create flour, and also raw ingredients such as proteins and fatty acids. The idea is to use these various products in pet food and feeds for aquaculture, aviculture and animal production.

Entomotech is not yet in production, but they are research a huge variety of insect applications. Anything from insect feed alternatives to medicine, they are looking into it.

Co-Prot are focused on the South-East Asian markets supplying animal feed and related products. They work with the Black Solider Fly, their Lavea and it’s derivatives. They have a few products you can buy including:

The insect based feed industry is just starting to take shape and things are changing at a rapid pace. There are many more companies out there still in the R&D phase and they will certainly have a lot to teach us in the years to come.

I hope you are as excited as I am about the future of insects in feed production and look forward to hearing your thoughts on social media! 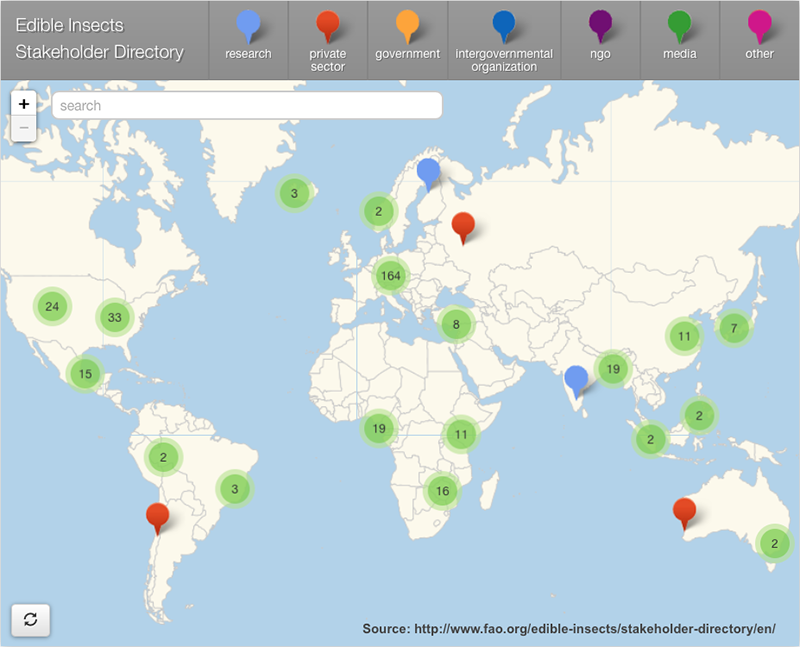 This directory lets stakeholders present their current and past work on insects as feed and food. It also enables users to identify synergies on cross cutting topics such as: nutrition, livestock management, legislation, labelling and investment while facilitating networking at regional/national levels.