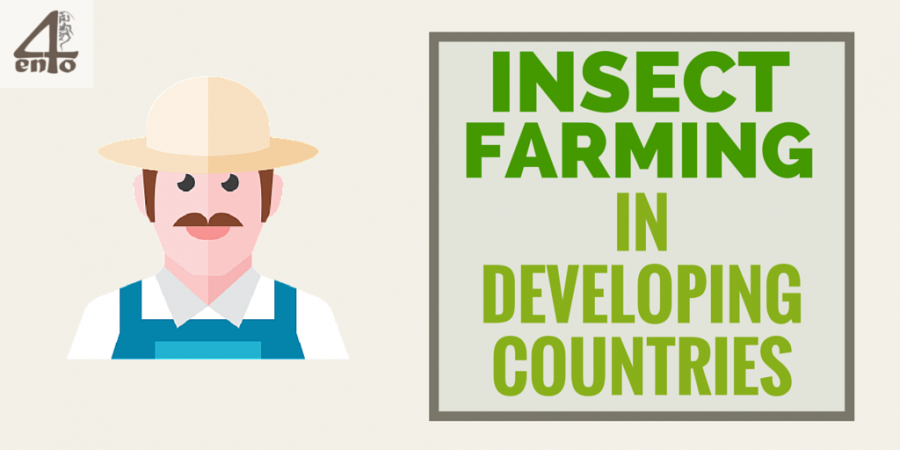 In this post, I am going to show you how insect farming is not only revolutionizing the Western World, but also having huge impact on the lives of people in developing countries too.

As many of you may have heard, Insect farming is a new trend that is sweeping the western world. It is rising from our needs for animal protein, an increasing need that cannot continue to be meet as the world population explodes.

Insect farming might be one of the best solutions, too, for helping developing countries become independent, or, at the very least, less dependent upon industrialized nations.

Although no clear definition of developing or “third world country” exists, this type of country is generally thought of as being underdeveloped, non-industrialized, and extremely poor. These countries also exhibit the lowest indicators of socioeconomic development, have high population growth, and suffer from high mortality rates.

The following map will help give you a clearer idea of the areas that are included, mostly Africa, Asia, South America and parts of Oceania.

Entomophagy (the act of eating insects) has been practiced worldwide for a many years. And in fact, most of these developing countries are already incorporating insects into their diets. At least two billion people in parts of Asia and Africa consume more than 1,900 species of edible insects, with beetles, caterpillars, bees, wasps, ants, grasshoppers, dragonflies, and crickets being the most common.

Now bugs have found their way into the Western world, too. Crickets are being used in flour and baked goods such as protein bars and tortilla chips. The extract from cochineals is used in red food dyes. Restaurants in the United States and Canada are even making insects part of their menus.

Bugs can be found practically everywhere, they reproduce quickly, and require only a fraction of the resources needed to sustain them. It is also far cheaper to raise insects than it is to rear cattle, pigs, or poultry, due to the amount of resources — such as land and water — used.

When you compare the statistics for rearing cattle against those of rearing crickets, the savings are astonishing. Crickets require a mind-blowing 2000 times less water than cattle to produce. Crickets don’t require as much land as cattle, either.

The following infographic gives you a great overview of how many benefits crickets really have when compared to traditional cattle farming.

Of course, there is also the fact that bugs also emit fewer greenhouse gases and less ammonia than livestock. But that is a story for another time.

The main point I want to make here is that this is all great news for farmers in developing nations— they can raise these insects themselves, using less resources to produce the same amount of product. And in countries where resources are scarce, this is not only beneficial but perhaps a necessity as well.

Starting An Insect Farm Is Not Simple

Before starting an insect farm, potential insect farmers are going to need to know the answers to the following questions:

Because there are still no specific education offered in how to start and manage a bug farm, and potential farmers are confused by the lack of regulations, beginning an insect farm poses quite a few challenges.

However, despite the huge uncertainty there have already been quite a few success stories in some of these developing countries.

Thailand has seen particular success, especially given the demand for insects is increasing despite the negative perception we in the Western World have. In fact the FAO has praised Thailand and found that they are:

Farmers in other countries are slowly learning that insect farming could be the answer to overcoming their poverty.

Here are two particular examples of how successful people have been in Thailand:

#1. Thailand’s Aunt Jai set out to satisfy her daughter’s cricket cravings. Little did she know she’d be the talk of her village and end up tripling her initial investment within five months, going on to make more than that per month (!), with plans to double her income in the future. Eventually, she plans on selling to wholesalers!

#2. Boontham Puthachat lives in Thanon Nang Klarn, a village in Thailand. Boontham’s family has learned how to become self-sufficient by eating and selling crickets.

Another exciting example is one being lead by the FAO. In 2013, they launched a 7-year program to train 1000 people in the city of Kinshasa, Africa in insect rearing and processing techniques to become insect farmers and further train others after project termination. They are currently in Year 2, and could be a success story to watch out for in the future.

Outside of Thailand, great strides are being made to support local farmers in other developing countries as well. Here’s an example of how private companies can are helping local farmers in Mexico:

The Chapulín is already a well-established and accepted protein source in Mexico. Yet a combination of factors, such as lack of commercial production facilities, transparency over grasshopper handling, and a modest investment in modern agricultural technologies and techniques are hampering an increase in production to meet demand. The result: Chapulín is a more expensive protein source than beef.

Working with the government and local associations, the Aspire Food Group is helping independent farmers in Mexico set up modern commercial production facilities to breed Chapulínes, creating a source of nutritious food and a potential year round income.

Insect farming is certainly an option for both the First and Third World, but if people want to take this to a more sustainable and manageable scale, perhaps more innovation is needed. After all, not everyone wants to become a large scale farmer in order to provide enough protein for themselves or their family.

That is where one man is trying to make a big difference. Jakub Dzamba, a Ph.D. student  at McGill University has founded a company called Third Millennium Farming. He aims to produce an easy to transport and simple to use insect farm.

In the short-term, Dzamba imagines that the contraptions could find a market in developing world countries that grapple with droughts, malnourishment, and poverty, and may already eat some insects in their diet.

You can read more about his ideas and company in this article. However, it is certainly becoming clear that a combination of large and small scale farms could certainly help these developing countries thrive through the use and farming of insects.

Another example of a company creating innovative, responsible business models and products to help farmers in developing countries comes from the company Khepri, in Europe.

They have developed a cage with the warm and humid regions of Southeast Asia in mind. It is ecological, ergonomic, rot-proof and easy to move during the rainy season. The drawer system allows for easy separation of generations eliminating cannibalism between generations.

Insect Farming Is Here To Stay

Insect farming for food, as well as livestock feed, will become more and more sustainable over time, especially in developing countries. The above success stories show that it’s already a lucrative enterprise, and with more and more people learning about the many benefits insects provide, insect farming can be seen as an innovative solution for ending world protein shortages.

What are your thoughts on the future of Insect farming and breeding? I’d love to hear from you.